23 May Peewee to Bantam Hockey

When going from peewee to bantam hockey, every parent must be aware that:

1) Anticipation leads to success- Time and again you hear coaches say “the older you get, the smaller the rinks get”. This sage advice extends beyond spatial awareness and into the time allotted to react to pressure, puck possession and available passing options. The longer a player holds on to the puck, the smaller the rink seems to become. From younger heads up hockey skills, to atom level anticipation, a peewee player must make it a habit to take a split second mental snapshot of the ice prior to getting the puck. You need to know what you are going to to do with the puck before you get it!

2) A quick shot is more useful than a pretty shot- With anticipation of the puck, goes visualization and prior knowledge of where you want to put the puck. Young players stop the puck, organize themselves and then shoot once it is passed to them. Mature players have already shot the puck 3-4 times in their heads before it has actually arrived. Being able to release the puck as quick as possible should be the goal of every player the summer before they hit PeeWee. From shooting 100 pucks a day leading into minor PeeWee, player should be receiving 100 passes a day going from Peewee to Bantam! 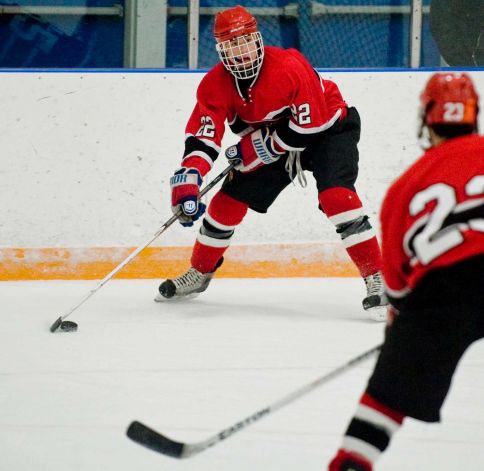 between passing a puck and sending it! Passing is just concerned about getting from Point A to Point B Tape to Tape, sending is all about getting it there in the blink of an eye. There just isn’t enough time or space for a teammate to wait for the puck to get to him or her. A players passing skill focus should shift from accuracy in Novice and Atom, to speed and strength from PeeWee to Bantam. A player should also work on developing fakes and masking his or her true passing intentions. The rinks are way to small to allow everyone in the building a chance to know where you are going to move it to. The old look in the other direction and pass, or quick backhand send while wheeling are great tools to work on and (and very impressive in the stands).

4) It’s all about Time Skating – The focus of a young hockey player is getting “there” fast, a mature player EXPLODES “there” at the right time. Learning how to change speeds, loop out and take up ice are part of gaining the ability to both remain stealth when needed, as well as skating into important areas with authority at the right time. If timing truly is everything, then getting to an important spot on the ice is sure to spoil the party! The late Igor Korolev once told me that Mario Lemieux was the best player he ever played against. When I asked him “What about Gretzkey?” I’ll never forget him saying ” No one ever played against Wayne because you never knew where he was on the ice or where he was going to pop out from! Wayne got to play against you, but you never got to play against him!” Master of disguise in an open playing field must become Master of Surprise!”

players transitioning into young men and women because of the flurry of new and heightened hormone levels rushing through their veins. Testosterone levels are becoming a major driving force in young boys at this time. Couple that with new societal wants and desires and the frustration of fitting in at school and gaining freedom at home, and you have yourself quite the tornado of emotions. Coaches and parents really need to begin to stress the psychological side of preparation and focus in hockey. From visualization and breathing, to energization techniques and positive self-talk, a player must realize the increasing importance of the mental game as they become adults.  This is totally foreign to anyone who has spent the last 8-10 years focusing on physical mastery in order to be successful. Time and time again, I have seen many talented young players fall by the waste side as they become adults because of their inability to control their emotions and stay disciplined when the team needs them most.