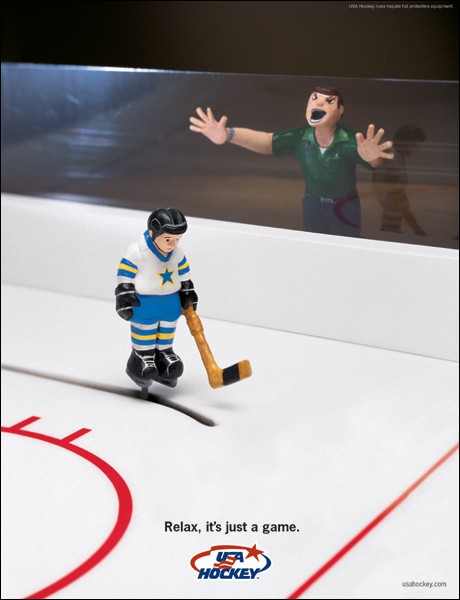 Hockey Dad ? When it comes to minor hockey, at what point do we say a parent’s passion for

the game has gone “offside”. It is amazing to walk into a rink and see even the most logical people pressed up against the glass, clutching their Java and screaming their way through 35-60 minutes of  a wild emotional rollercoaster. spending enough time around the rinks, you can almost group hockey dad’s into categories based on their atypically typical behaviours. Let’s have a look.

The Pokerface– Cool as ice, this guy never shows his cards. Never high with the highs, or low with the lows, this hockey dad might as well be called Iceman. Never throwing the arms in the air, or clapping after a goal, you could miss a lot of the game staring at this guy and wondering what he is thinking.

The Wanderer – Wide eyed and mesmerized by the play, this dad literally paces along the bleachers. Shadowing his son on the ice, this dad is only stationary in the stands while his son is covering the point! You need to have your head on the swivel with this guy marching about, he may make you spill your coffee!

The Addict– Needing a quick fix of elation and serotonin, 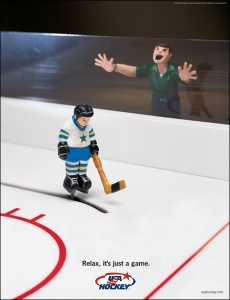 this guy is on edge waiting for his kid to end the slump and bury the biscuit. You can spot these guys a mile away; if not from their unmistakeable stare, check out their white knuckled grip on the coffee cup.

Grapes – A.K.A. “Mr. Hand Gestures”, this guy’s emotions are written on his sleaves. The first to fist pump celly after a goal, he’s also prone to throwing his arms up in disbelief when his kid misses a pass. Better watch your bag of popcorn because this guys arms are out of control.

The Salesman– Parent by parent, this dad can be seen pitching parents the entire game. Selling his kid like the soup of the day, his tactics are clever. By the end of the conversation, you can’t help but agree that his kid belongs on the first power play unit and that the coach made a big mistake not giving him the “C”.

The Know-It-All – Sitting next to this guy will make you feel so fortunate, fortunate that you don’t have to live with him! Never a dull moment, this guy will comment on every play of the game, enlightening you with his pre-1975 AAA knowledge of the game. This guy watches every practice with a magnifying glass and still can’t understand why the team isn’t playing the 1-2-2 24/7, 365!