Doctor’s Diagnosis: Stay Sharp Out There! 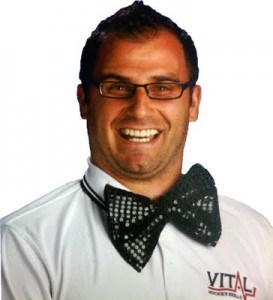 So you are in line at the hockey section of the local sports store waiting to get your kids skates sharpened and ahead of you is “Super Enthusiastic Hockey Dad Guy”, you know the guy with more muscle tone for a gentleman his age, the almost made it but hurt my knee guy who spends his time now running a business from him cell phone wearing matching minor hockey jackets with his son? Anyway, you can’t help but overhear him talking to the slightly moustached teenager sharpening skates behind the counter. “Yeah, he’s got a big game tonight, ice in that barn is cold and hard so we are going to have to go with a 3/8ths and shift the radius back toward the heel a a bit…. blah blah blah”. Other than than sinking feeling in your stomach that you get when the pro ahead of you is ordering a grande caramal frappa lappa cappa-cino at Starbucks, you can’t help but notice that the boy is only 8!!! Nonetheless, when you get up there and Superdad walks away rubbing little Billy’s hair, the best thing you can shamefully blurt out is “I like ’em real sharp”.

The unfortunate truth about minor hockey: Although people make choosing a new stick a “personal and intimate outing”, but many of us are too quick put the fate of our skates in the hands of a complete stranger with a grindstone! Some of us may feel fortunate to find a guy who “does a really good job”, but what does “good job” really mean? Can Marv at the community center be doing a better job of making them “real sharp”? What type of questions should we ask about the condition of our skates? What do we look for when they are handed back to us to assess the job done? What types of sharpening technologies are out there and how do they differ? and What the hec does 3/8 radius mean?

I know I was supposed to do a skill analysis this week, but I was motivated to do this peace on skate sharpening by an experience I had with one of my defencemen on my minor hockey team. All year I have been watching this kid struggle to master skills, or fall down unintentionally, and while I focused on technique and motivation, I truly overlooked his skates. 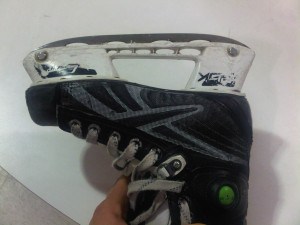 Asking his dad, he was always claiming to have gotten them sharpened, but judging by the horror that I saw when I finally looked at his skate… too much, and definitely not by qualified people! I was in complete disbelief not only by how much the metal had been ground, but by how the skate had repeatedly been sharpened from tip to tip, leaving a crescent shaped blade!

Let’s slow time down for a second, and take a look at what aspects of the skate blade need to be considered before we thank the young gentleman who just sharpened them! 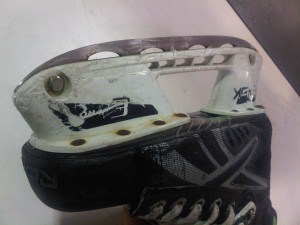 It takes a skilled skate sharpener to establish a curvature on the blade that is in line with the position, height, weight and body type of a player. The curvature established is measured in feet and referred to as a radius, as if the blade was part of a large circle. The location of the skates radius, is basically, the balance point of the blade and optimally should be located directly under the ball of the players foot. Generally a typical senior hockey skate will have a 9′ or 11′ radius, whereas a goalie skate will have a 28′ radius.Rocker radius is critical to the players balance. If it is shifted to far forward, the blade will give the player a tipping forward feeling. A proper radius will make a player appear to have a natural knee bend in their stride and give them an uncanny ability to be able to accelerate through curves with full crossovers. A simple test to see where the radius is, is to stand the blade up on a flat surface and push down on the skate from the opening, simulating body weight. If you do this right, you should be able to tell whether the boot has a tendency to tip forward, or backward with balanced pressure coming down the leg. 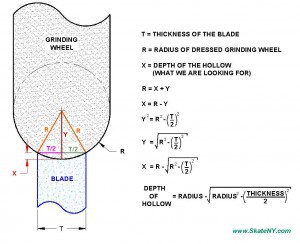 2) “Hollow” out there, we’re on the air…!
This is also known as the blade’s radius, but it is not the same as the Rocker Radius above. Where the rocker radius deals with the balance point along the entire length of the blade, a hollow deals with how deep the stone carves into it. The radius that the sharpening stone has been set to determines this prior to making contact with your skate. I should note here that there is no way of telling by eye (unless you have been sharpening for 30 years) what hollow was put on the blade. The skater must come to an understanding of what would be best for them ahead of time. The picture on the right sums it up pretty well! Although the math looks absolutely ridiculous, I’ll sum it up in laymens terms! The sharpening wheel is “dressed” (grinded down with a diamond bit) so that the curve of the outer edge will have a certain length from end to end. Remember that the length across a half circle is known as a diameter and half of the diameter is known as the radius. Sooooo, the wider the arch on the outer stone, the longer the diameter/radius. With a bigger radius, there will be less of a hollow placed on the blade as the stone contact the blade accross a wider area. The smaller the radius placed on the sharpening wheel, the deeper the skate blade will be hollowed! I found this chart online and it seems to be a simple way to see the results of different sharpening stone settings and their effect on the blade! 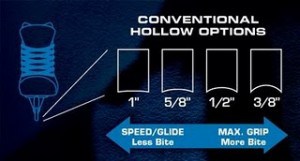 Usually you only need to worry about this with actual hand held sharpening. This just refers to slowing down how fast the stone passes along the blade. If this is done properly there will be a shiney, mirror-like appearance on the the blade. This is important as it provides a frictionless finish for better glide and less restrictive movement! If the blade looks dull, or the markings are inconsistent, then the grinding stone was not dressed properly or your blade may be bent.

These are just a few points, and there are a lot more, but never fear! I won’t leave you hanging! I would recommend all you keeners and skate sharpening enthusiats out there google the work of Kelly Lockwood and Andrew Winchester at Brock University! They are definitely worthy of hockey pHDs!!! Also, for those looking to improve their coaching and playing in the vast number of other areas… be sure to click on the banner below and check out some of the amazing products that they feature!