Chicago Blackhawks: Top 5 ways to get past the L.A. Kings

03 Jun Chicago Blackhawks: Top 5 ways to get past the L.A. Kings 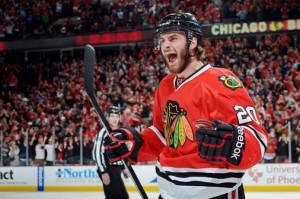 There is no doubt in anyone’s mind that this Chicago team has found a recipe to win of late! You can only scratch your head and wonder where the over-eager group of young guys,that almost blew the series with Detroit disappeared to? The Chicago Blackhawks are playing the exact way you would expect a bunch of young player to play once they settle down, but the series is far from over. Without further ado…

The Top 5 things the Chicago Blackhawks must do to finish off the L.A. Kings:

1) Own the neutral zone with speed and support: The Chicago Blackhawks are doing a great job of getting their feet moving up ice before receiving the puck in the neutral zone. The result: very difficult to catch and always seeming to be one step ahead of the L.A. backpressure. They are also doing a phenomenal job accelerating toward the man with the puck to support. The result: Easy entry into the L.A. defensive zone.

2) Make traffic in front: One of the commentators made a great point of the amount of traffic the Blackhawks were putting in front of the L.A. Kings net! “Keeping Quick in the blue ice” and not letting him out to challenge shooters by proper traffice, lets the Chicago shooters see a lot more of the net when shooting from far out. all a person needs to do is see the clip of Bickells impression of Dino Cicarelli on the second Chicago goal, and they’ll agree for sure!

3) Stay out of the box: The Chicago Blackhawks are one of the most impressive teams in the NHL… when they aren’t in the penalty box. They can’t afford to get sucked into penalties and losing focus. 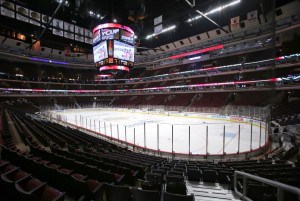 After almost losing the Detroit series because of hot headed mistakes, they need to keep putting the team first and sacrifice for the thought of “putting another banner on the rafters!”

4) Protect the house: This might be an obvious one, but there is no doubt in anyone’s mind that Kings are going to stop at nothing to penetrate the slot in the Chicago Blackhawks end Tuesday night. Success in the Chicago end will no-doubt depend on getting in the shooting lanes and the weak-side winger collapsing low to help out in front of the net!

5) Cycle low and keep the puck deep: As David Wharton of the Los Angeles Times points out the “Kings are feeling battered as injuries stack up“. The Chicago Blackhawks need to capitalize on this and keep them against the ropes by driving the puck in deep and cycling low along the wall. They have been putting the puck back to the point a lot which has worked, but as the series drags on, a tired, injured Kings team will hope for this for easy turnover and breakout!