When going from Bantam to Midget hockey, every parent must be aware that:

1) There is no substitute for great skating. As players get older and develop 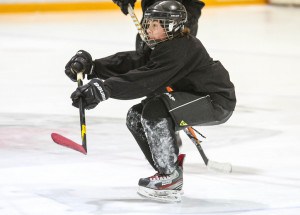 their own styles for skills that they have been learning since novice, bantam to midget players often develop bad habits. While a lot of players shift their attention on being better with the puck, it doesn’t hurt to revisit some of the more novice skills to refresh on technique and make sure they are still efficient. A great way to get out onto a new plateau.

2) Hockey is a 2 way sport. The faster a player can learn to take defensive roles seriously, the more they begin to prove their ability to play at a  higher level. A lot of parents watching their little phenoms since Tyke over emphasize goal scoring. Some are absolutely miserable after a game if their kid hasn’t scored, even though he has contributed to the win in many other ways. Players should aim to educate themselves better on hockey away from the puck and learn to watch a game through scouts eyes so that they can promote tactics that will make their child more of an assets in non-goalscoring aspects of the game.

3) Shot power says a lot about development away from the rink. Knowing that the days of working on shots at practice are a thing of the past, a player who has a howitzer, is a player who works their tail off at home and in the gym after hours. Shot power comes from explosiveness, which only develops after a base of strength has been laid down. Unless a player is willing to sweat a little away from the rink, they won’t be able to lay the groundwork for strength necessary to develop a cannon. Show me a kid that can shoot and I’ll show you a kid that is willing to work hard!

4) Players need to develop mental strategies to ensure consistency. I never understood how parents will spend hundreds yearly to work on a crusty stride, but will feel no sense of urgency when it comes to psych skills like visualization, imagery and positive self-talk. As the players get older it becom

es less and less okay to play one great game every seven. Coaches and scouts alike crave consistency, players that they can depend on nightly. While neuromuscular development can dictate effort and ability, only psychological mastery can promote consistent performance. Neglecting the brain in sports performance is like building a race car without a battery.

5) Playing a second year of midget doesn’t mean the dream is over. A lot of parents and players feel that it is a strike against a player to play midget. I hear it all the time “If they haven’t been selected by bantam, it’s hopeless. While it is true that some phenoms spring up time and again that can make the jump quickly, it doesn’t mean everyone has to. The bottom line is that from Bantam to Midget, players are in the turbulent time of development known as adolescence and developing at different rates. No one can control this genetically controlled event, but parents can safeguard against it… make sure that the player is playing hockey because they love it! If they haven’t lost the love of going to the rink, being a beauty and part of the team, then they will be able to play long enough to let the imbalance of puberty even out. Focusing on the feeling will prolong it, focusing on the outcome will cut it short in a hurry.