So you are looking to make the jump, you read the post about how not to get cut and you are wondering if there is any magical formula to making a team. Well then, you are definitely reading the right blog post! I’m going to take you through the

As of Monday April 9th, every rink in the GTA received a fat ol’ stack of newspapers that feature all 2012 GTHL Tryouts. This will be the starting point for your quest to find the “greener grass” or simply get an idea of who’s who at any level. This is a great resource to use to make a few calls to get a feel for how many spots are available.

2) Be up-to-date on the latest hockey gossip

great resources out there to get an idea of what teams are looking for spots to be filled and more specifically what positions. There are some great resources to stop you from having to call through the entire list of coaches, but be weary about ones like Network 54, which have more pot stirrers spewing out nonsense than anything else.

3) Be cordial on the phone:

When calling a coach, always start with where your son played and keep your questions simple and straight forward. Beating around the bush or trying to hide the fact that they played “A” last year won’t get you anywhere. Keep it simple: are there any spots, if so what positions (never ask how many, or who else they have coming to the team), are there any skates you can go to ahead of the try-outs to see how he measures up. This call is to gather information, not try to sell your kid.

4) Go to a try-out for that particular team only

Sometimes there are multiple teams trying out on the same nights, at the same multiple pad facilities. The

worst thing you can do is sign in at one try-out then walk across and go talk to the coaches from the other teams. Go with one team in mind no matter how tempting. If you don’t make the cut, then venture across and explore other options.

5) Let your kid do the talking

Good coaches will always place emphasis on how a player carries himself. On the ice, make sure to not pace up and down, make hand gestures to skate harder or 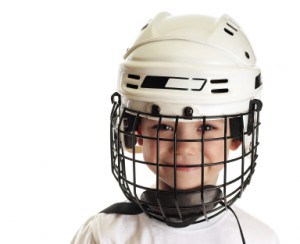 bang on the glass. Pay as much attention to your body language as you can and look as non-psycho as possible. Off the ice, it’s great to encourage your son to introduce himself to the coach. You would be amazed at how a “look-in-the-eye” introduction with a firm handshake can make a player stand out. After the tryout, make sure your son goes up to the coaches to thank them for the opportunity to skate. Also, never, never carry your kids bag to the dressing room. Nothing says “Bush League” more than walking your kids bag into the room, or bringing them dressed to the try-out.

These are just a few of the many tips there are out there for a success in the 2012 GTHL tryouts. Making the cut isn’t always easy, especially when trying to jump a level, but acting the part can sometimes be half the battle.